Hey punks! Crazy times, pandemic, fascists in parliament, no shows. So we decided to film a set and release it as a benefitstream for Sea-Watch. They are out there on the Mediterranean Sea saving lives. The Stream Of World Decay premieres this Thursday July 1 at 21:00 GMT+2. You can watch this show for free, but please consider to make a donation on www.smashthestatues.net/donate

Go ahead punk, click that notification icon. Or how does this stuff work?

We played some songs we haven’t played in over 10 years or some songs we never even played live before. Massive thanks go out to Thomas from Theo Producties for filming and editing, Nico van Montfort for recording and mixing, Robbie & Doornroosje for the location, Ab Al-tamimi from Rogue Minor for contributing and Eelco from White Russian Records for helping out.

Hey punks, after a bunch of canceled shows, we decided to hook up after not seeing eachother for 9 months and give birth to a rehearsal video. Filmed with a couple of phones after we screamed our hearts out for a few hours, so forgive our rusty vocals. It’s the songs “The Eternal Nation” and “Forvm” from our latest album “Forvm”.

We released that one on vinyl last year and still got some copies left. Because you can’t go shopping for the holidays due to covid-19 and because #zwartepietisracisme we’re offering some discount on this anti-fascist LP and our merch. Until Sinterklaas (December 5) you can order the LP for 10 euros. Fair & organic shirts are 10, zippers are 20 (ex shipping). Get yours at music.smashthestatues.net/merch. Stay safe, stay sane and smash fascism! 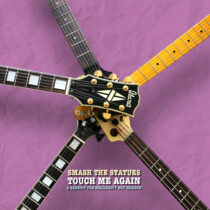 Here is our version of the Petrol Girls song Touch Me Again. A song about sexual harassment and sexual violence. I remember my first time seeing them perform this song. Such a powerful performance that sent shivers down my spine. We might think we built a community with punk ethics, that is openminded and treats everyone as equals, but let’s not forget our community is just like any other. In the UK there is a legal battle between a well known musician and women who dared to speak up against his actions of sexual misbehaviour. These women, united in Solidarity NOT Silence, are facing a defamation case. They chose not to be silent, which means there will be a long and expensive case. Solidarity Not Silence needs all support they can get. One of the women is Ren from Petrol Girls, a band we shared stages with in the past and some of their members we have been friends with for 15 years. That is why we decided to record a cover of Touch Me Again and donate all profits to Solidarity Not Silence. We asked our and their friend Roos to join us and we’re thrilled to have her vocals, filled with emotion and anger on board.

Please check out www.crowdjustice.com/case/solidaritynotsilence and see if you could help out by donating money, setting up benefit shows or record a song for charity. We decided to enable the download for a pay-what-you-want price, so it’s affordable for everyone. So buy our song and help out Solidarity Not Silence.

(Donations go through bandcamp. White Russian Records will release this track later on all digital platforms.)

Word is born. Word is out. We’re playing AnthemFest 1/3 on March 21st at World Skate Center in Den Bosch. This Fest will be a fundraiser for The Anthem Project, an initiative to capture the Dutch skatepunk/punkrockscene that has been around since the 90’s. Our soulmates in Antillectual will play, Coral Springs will play and Oh See Demons will play. Next few days more names will be dropped. Get your tickets soon, cause this banger is gonna be soul doubt. 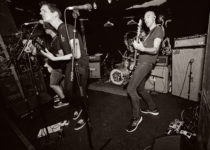 A few days ago we came back back from tour. Played Denmark for the first time and played Norway and Sweden again after 11 years. We had great times, went to inspiring places and say amazing bands. Thanks to everyone that booked us a show, hosted us and gave us food. Special thanks go out to Stefan and No Fun At All, Eva, Henri at Destiny Tourbooking, Troels, Jan and Out Of Bounds, the people at Blitz, Myteri, Illvilja, Dødsdømt, Afke & Espen, Fredrik, Sophia and Hannes at Sekten, Dolorifics, Jens from The Bowery Room, Micky and Uphill Struggle, Wayl and Peter Rosvik for making awesome photos in Oslo. See you all next time. Meanwhile, enjoy our new LP Forvm: https://open.spotify.com/album/5ut8E7J2LqI7ua1m6dCH4R 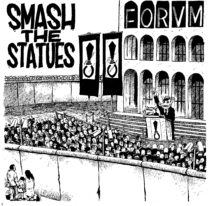 No, this is not your worst nightmare… This is FORVM, our latest record, out today on White Russian Records on 12″ vinyl and available on all your favorite streaming services! It’s a warning against the rise of neo-fascism and the extreme right in ten short, fast loud bursts. Check it out here: https://music.smashthestatues.net/album/forvm

More on how this record became to be? Read the interview Never Mind The Hype did with us on our new record here. [dutch]

Tomorrow may 18th we’ll throw a little releaseparty in de Plu in Nijmegen. Come dance with us, Note to Amy and New Best Friend! 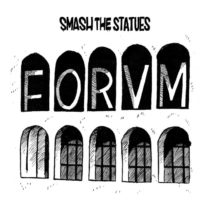 “Let me paint a picture in tones of black and grey…”

Today, on May 5th, we celebrate Liberation Day in The Netherlands. A day that stands for a country liberated from fascism. But in The Netherlands, lots of countries in Europe and basically all over the world we see the rise of neo-fascism. Extreme right parties that claim they will defend our freedom or our democracy, often with those words in their names, probably won’t get the irony that they are paving the way for a society that looks horribly like the fascist societies we have seen in the past. Our new single, titletrack of the record and knuffelrock-styled powerballad “Forvm” is meant as a warning for a society that might be not that far from here. Can’t you hear them knocking? They’re on your doorstep.

Don’t say we didn’t warn you!

https://open.spotify.com/album/2C8uHqdogMMwR8PTDxezXb
For non-spotifiers, this song is up on our bandcamp too.

Countrymen and owls of Minerva beware, Smash The Statues are releasing their new LP ‘Forvm’ on White Russian Records on May 17. To celebrate the new release, we’re throwing a releaseparty on Saturday the 18th of May, in one of Nijmegen’s coolest DIY spaces: De Paraplufabriek. One minute from Nijmegen Central Station and a show that will end at 23:00. So unless the boreal wind is too strong, everyone could make it back home.

Last Wednesday, the elections in The Netherlands were won by a political party called Forum voor Democratie. With their anti-establishment, yet elitist approach, they present themselves as a civilized alternative for the current political parties. But with their glorification of Owls of Minerva, The Renaissance and the smell of lavender, they also bring us Boreal winds to keep Europe white. Cause these fascists (not an insult, just a qualification) are openly racist, anti-feminist and totalitarian. They want to keep Europe white, purify education and journalism from leftist elements. With connections to well known alt-right/far-right/extreme-right persons and parties all over the white world and lesser known connections to fascist groups in The Netherlands, this is not an ordinary anti-establishment party, these are neo-fascists. And if we stop calling fascists what they are, then we’re on a sliding scale and normalize what once was extreme.

Rewind to last December. Four old white men decided to write and record a new album. In a few weeks time we wrote and recorded our “Aanval op de nazistaat”*. We decided to call it “Forvm” and it was supposed to be a warning. The A side of the record deals with the current upcoming fascist parties, that always have Freedom or Democracy in their names. Apparently the elections caught up on us. So the B-side paints a picture of a dystopian world that might be not that far from here. Please let that be a warning, before it’s too late again.

So a few days after the elections, we’re not proud, but we feel obligated to share the first single of our upcoming album with you. “Dvm Navis Praetoria Ressvrectionis ad Profiscendvm parata est”, or when the neo-fascists come sailing in. But remember countrymen (from all countries, races, genders) every boat can sink. It’s just waiting for the right iceberg. So instead of telling you to enjoy our new single or record, we hope it will inspire you to resist fascism in all its ways. Punk = verzet. No pasaran. We’ll be sinking your ship!

FORVM will be released on may 17th 2019 on White Russian Records. Pre-orders available on www.whiterussianrecords.nl

* See what we did there Thierry?